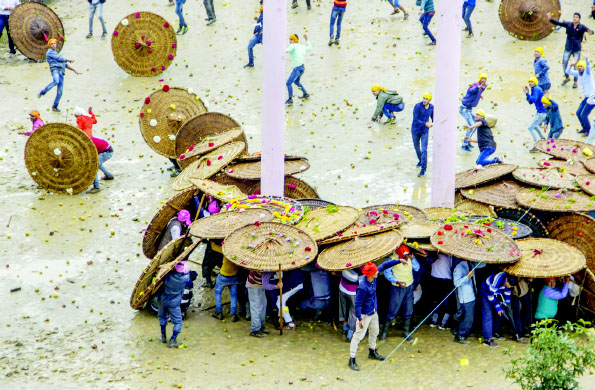 India is a country of festival where people from different communities and religions celebrate together. One such festival which is celebrated in beautiful Uttarakhand state of India is “Bagwal”.

Where is Bagwal festival celebrated ?

Bagwal festival is an age old festival celebrated in Champawat district of Uttrakhand.

It is also known as Devidhura festival as it is celebrated to please devi Varah in Devidhura temple.

Devidhura marks the tri-junction of three districts of Uttrakhand:  Almorah, Nainital and Pithoragarh.

When is Bagwal festival celebrated?

How to celebrate Bagwal festival?

Devotees from different parts gather at the Devidhura temple in Champawat district of Uttarakhand to celebated Bagwal festival.

First of all the priest of the temple holds a prayer of the deity. He then offers prasad to the people gathered there.

The four khams take position in four different corners of the Devidhura temple. The priest start the festival with a sound of “shankh”. The groups formed above start throwing stones at each other. They get wounds and a lot of blood also flows but they consider it good. They threw stones at each other and protect themselves with a shield of wood. This shield is called “Farra”. They considered the wounds or blood due to injuries as auspicious sign.

This old ritual ends only when the head priest of the temple gives a signal.

People have a strong belief that the goddess Barah devi is pleased with the blood flowing due to wounds which they consider equivalent to human sacrifice.

Many people are injured and get lots of wounds but still they are not unhappy with this. They deliberately fight and are pleased to get the wounds.

Why do devotees pelt stones in Bagwal festival?

Actually, in old times people would offer human body to please the goddess. One dayit was the chance of an old woman to offer her only grandson to the goddess. She pleaded with the goddess to spare his life.

In old times, human sacrifice used to be made annually on the occasion to please the goddess. One day, when it was the turn of an old woman to offer the body of her only grandson to the deity, she pleaded with the deity to save her grandchild.

Her prayers were listened by Maa Barah devi. She came in the dreams of the devotees and asked them to stop offering human bodies to her now. Instead, she asked them to pelt stones on to each other and shed as much blood as possible to count it equivalent to the sacrifice of a human body. Since that day, on the day of Raksha bandhan which comes on the day of Shravan purnima, Bagwal festival is celebrated.

People believe that there has never been any mis-happening in the Bagwal festival with the blessings of Maa Barah devi.

Though in India, the court has strictly banned use of stones in the festival but somehow locals manage to do it to celebrate it.

Why don't you write your own article on Omilights, this is so simple so get started today..
Tags:bagwal festival, bagwal-stone-pelting, festival of champaran, four khams ferra