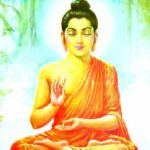 Bharat bhoomi (India) has been the land of warriors. Also, she has given birth to some of the most magnificent personalities in the world, who fought all atrocities and still retain there calm and wisdom. They rose from the realm of ordinary human being, served as the saviour of dharma and enlightened the whole world with their spiritual knowledge and wisdom.

Many festivals are celebrated to show our gratitude towards them and follow their principles. One such festival is”Mahaveer Janma Kalyanak”.

Mahaveer Janma Kalyanak is one of the most important religious festivals for Jains. It celebrates the birth of Mahaveer. According to Jainism, 24 Tirthankaras have appeared on earth, who shaped Jainism. Mahavira was the twenty-fourth  Tirthankara who revived and spread Jainism. According to Jain philosophy, all Tirthankaras were born as human beings but they have attained a state of perfection or enlightenment through meditation and self-realization (keval-jnana).

Mahavira was born into the royal Kshatriya family of King Siddhartha and Queen Trishala of the Ikshvaku dynasty, which is the the dynasty of Lord Rama too. According to the Jain texts, Mahaveer was born on the thirteenth day of the bright half of the moon in the month of Chaitra in the year 599 BCE. According to Gregorian calendar, Vardhamana was born during the month of March-April, which is when Mahaveer Jayanti is celebrated today.

Mahaveera was named ‘Vardhamana’, which means “One who grows”. After his birth, his kingdom had the fortune to have increased prosperity.

Mahaveer’s parents were followers of the 23rd Tirthankara, Lord Parshwanath who attained moksha 250 years before the birth of Lord Mahavira.

Mahaveer is jitendriya who conquered and controlled all five entities of body I.e .touch, vision, ears, taste buds, and smell.

At the age of 30 years, after being born as a prince with all worldly leisure and royal lineage at hand, Mahaveera surrendered worldly possessions, including clothing, become a monk and went on the path of searching for truth, spiritual awaking and enlightenment.

According to traditional accounts, Mahavira achieved Kevala Jnana (omniscience, or infinite knowledge) under a Sāla tree on the bank of the River Rijupalika near Jrimbhikagrama at age 43, after twelve years of rigorous penance, won over his senses and become one with ultimate soul.

After experiencing 12 years of hard penance, a tired Mahaveera is said to have fallen asleep for a few moments when he experienced a series of 10 strange dreams. These dreams and their significance have been explained in Jain Scriptures as follows:

1. Defeating a Lion – signifies destruction of ‘moha’ or worldly attachment

2. A bird with white feathers following him – signifies attainment of purity of mind

4. Two gem strings appear in front – symbolizes preaching a dual religion, an amalgamation of principles from a monk’s life and duties of a common man.

5. A herd of white cows – symbolizes a group of devoted followers who will serve

6. A pond with open lotuses – symbolizes presence of celestial spirits who will propagate the cause

7. Crossed a waxy ocean swimming – symbolizes freedom from the cycles of death and rebirths

9. Encircling the mountain with your bluish intestines – symbolizes the universe will be privy to the knowledge

10. Sitting on a throne placed on summit of the Mount Meru – symbolizes people revering the knowledge being taught and placing Mahaveer in a place of respect.

Mahaveera preached that with right faith (samyak-Darshana), right knowledge (samyak-jnana), and right conduct (samyak-Charitra) together one can attain the liberation or moksha of one’s self. His teaching was based on five vows.

Nonviolence (Ahimsa) – not to cause harm to any living beings

Truthfulness (Satya) – to speak the harmless truth only

Non-stealing (Asteya) – not to take anything not properly given

Chastity (Brahmacharya) – not to indulge in sensual pleasure

Mahavira attained nirvana at the age of 72, and his body was cremated. On the night of his salvation, people celebrated the Festival of Lights (Dipavali) in his honor.

Why don't you write your own article on Omilights, this is so simple so get started today..
Tags:importance of mahaveer jayanti, Mahavir Jayanti-Know Importance and Significance