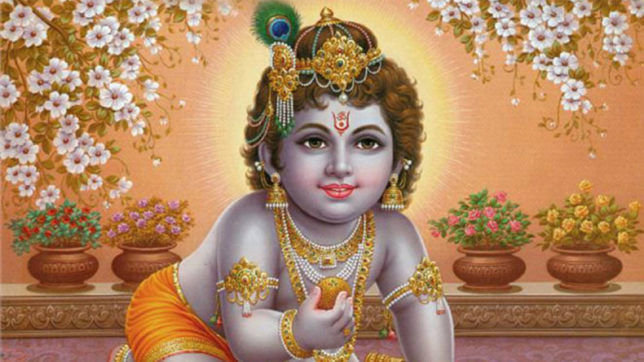 “Hathi khoda palki, Jai kanhaiya lal ki, jai kanhaiya lal ki…. Bolo banke bihari ki jai”. Every street and every temple is filled with these voices on the day of Janamasthmi. Everyone especially kids are very excited and are immersed in the unique colors of love and affection. Such is the magic of banke bihari lal, Kanhaiya in his birthday which is celebrated as Janamasthmi.

Janmashtami is one of the main festival of Hindus, which is not only celebrated in India but worldwide. It celebrates the birth of lord Krishna who is considered as the 8th incarnation of Lord Vishnu. Some people know Janamashtmi with other names also like Ashtami Rohini, Krishnamashtmi, Saatam Aatham etc.

Know about all 9 Incarnations or Avatars of Lord Vishnu so far.

The birth story of Krishna is also unique and not less than any mystery. His uncle, Kansa had put his parents(Vasudev and Devaki) and his own father, Ugrasen inside bars before the birth of Krishna.

Krishna was the eighth child of his parents, and as per the prophecy that predicted Kansa sister’s eighth child would be the cause of his death. This is the reason why Kansa put his sister and her brother in the prison. He killed all their six children who took birth before Krishna immediately after their birth. The sixth child was secretly transferred to Rohini who gave birth to Balarama.

When Devaki’s eighth child took birth, Vishnu instructed Vasudeva to take the child to Nanda and Yashoda of Gokul. Krishna was born in a very dark night and when it was raining very heavenly. The guards fell asleep, the prison locks got unlocked, and all their tied chains got unleashed. This made the way to Gokul easier for Vasudeva. Vasudeva took the baby on his head in a basket and crossed the Yamuna river to reach the Gokul village. Everyone in the village was sleeping. He kept the baby beside Yasodha and took her newly born daughter with him.

Kansa thought the girl is the eighth child of Devaki. The moment he took her into his hand, she rose in the air and warned that the one who would kill him has already taken birth. She revealed herself Yogmaya. On the other hand, Krishna grew up in Gokul playing with his elder brother, Balarama and friends. He killed Kansa in Mathura on growing up.

How is Janmashtami Celebrated?

Though there is no  hard and fast rule in worshiping your devotee but still people observe fasts, do chanting, and pray lord Krishna to fulfill their wishes and bring prosperity in their lives.

Krishna is an epitome of love and affection. He is the perfect example of a true friend, teacher, a son and a guide to the devotees. One can learn a lot from the life of Krishna.

There are many countries in the world, where Janamashtmi is celebrated equally as in India like Nepal, Jamaica and Suriname etc.

People just immerse themselves in the color of Lord Krishna on the day of Janamashti. They take bath and decorate their temple, dress up their idols with new clothes.

Little boys are dressed up like little Krishna, and little girls like Radha. People also worship little Krishna’s idol “Ladoo Gopal” and dress it up with new clothes. People make jhoolas for their ladoo gopal in their home also.

The festival is celebrated by singing, dancing and observing fasts. People keep fast and observe bhajan, keertans and dances in temples until 12 midnight. After, this the prasadam is distributed and people break their fast and eat food.

In Many places, dahi-handi program is also held. For this an earthen pot filled with buttermilk and ghee is kept at a height with a rope. Those who participate, make a human pyramid to reach the top of the pot and break it. They stand together and help each other in doing so. This inculcates the feelings of unity and team work among them.

Krishna spend  his major life time in Mathura, Gokul  and Vrindavan. So these places are well decorated in the eve of Janamashtmi. Live telecast of the various programs held in their famous temples are made to the television so that those who cannot enjoy physically being there can enjoy remotely.

Significance of Lord Krishna in Our Life

If we see the life of Lord Krishna, we can learn a lot from it. He played pranks, and was a mischievous person but every prank teaches many things to the world. He took avatar to teach people the real meaning of Karma. He taught how we can learn and gain so much in life by not worrying about fruits of the deeds.

Janamashtmi is celebrated in high spirits with great love and affection. Krishna’s teachings can help anyone find peace and real meaning in life. He did many miracles and Mayas in his life. He helped Arjun in the battleground of Mahabharata and set a perfect example of a guru.

His all the versus and the teachings are mentioned in the Bhagvad Gita. He says, “Whenever there is predominance of evil and decline of righteousness, I will incarnate to destroy them and re-establish Dharma in the World.“

Why don't you write your own article on Omilights, this is so simple so get started today..
Tags:Geeta Updesh and Mahabharat, India, India Festivals, Janmashtami, Shri Krishna, what is the significance of Lord Krishna birth, why do we celebrate Janmashtami